While probiotics get the most press attention, prebiotics are the nutrient superstars working behind the scenes without all the glory. Rather than feeding us directly, prebiotics feed the friendly bacteria that live in our gut and provide a myriad of health benefits. Prebiotics aren’t broken down by saliva like simple sugars, nor are they digested in the stomach or small intestine like proteins and complex carbohydrates. They pass right through to the upper digestive system to the large intestine, where they settle into our “microbiome” of living symbiotic bacteria.

Experts consider inulin one of the best prebiotics you can eat. It’s composed of long chains of fructose molecules, which is the simple sugar found in fruit. However, when linked together in long chains, it acts like fiber rather than sugar. The intermediate chains of inulin are usually referred to as FOS (fructooligosaccharides). This form of inulin mostly feeds the friendly bacteria in the upper large intestine. The longest chains of inulin are usually referred to simply as inulin. These feed mostly the bacteria in the lower, left section of the large intestine, i.e. the end of the intestine.

It can be difficult to get enough inulin in the modern American diet, even if you eat healthy. Raw vegetables, especially onions, contain small amounts of inulin, but it’s broken down and rendered far less useful with cooking. You can also find fair amounts of inulin in bitter herbs like dandelion root and chicory root. However, most people don’t eat consistently high qualities of these bitter plants. Anthropologists believe that primitive people foraging for raw plants probably got a lot more prebiotics, especially inulin, in their natural diets than we get in our modern “supermarket” diets.

Herbalife Nutrition, which was founded in the 1980s, is a global nutrition company whose mission is to make the world happier and healthier. They distribute nutrition and health products to over 90 countries worldwide. These products include those aimed at targeted nutrition, weight management, energy, fitness, and personal care. They’re high-quality and backed by science and, even better, if you decide to become a customer, you’ll benefit from one-on-one coaching with an independent and knowledgeable distributor.

The easiest way to get a healthy dose of inulin into your gut on a regular basis is to take it in supplement form. One of the best products to help you accomplish this goal is Herbalife Nutrition’s Simply Probiotic. The first ingredient in this product is inulin. It comes as a powder that can be easily stirred into any drink, hot or cold. It can also be used in baked goods or added to casseroles, soups, or smoothies, because extreme temperatures don’t damage it. For this reason, you can store it almost anywhere, from your kitchen pantry to the glove box in your car. 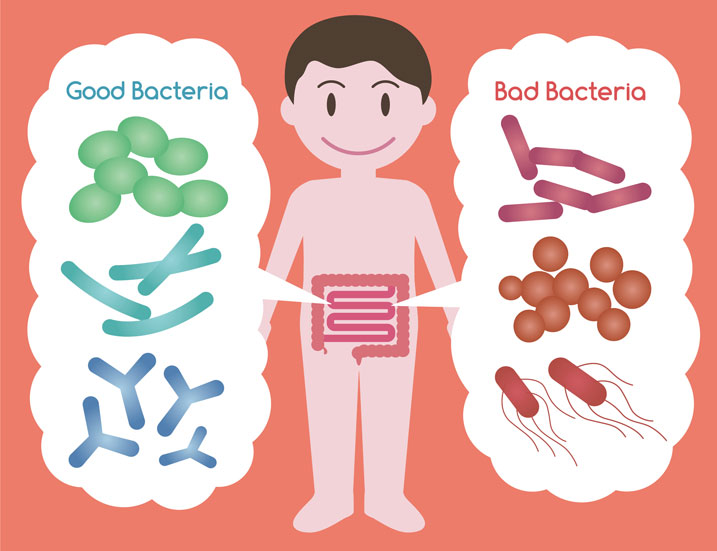 We have more good news from The Human Microbiome Project (HMP), funded by the National Institutes of Health (NIH) Common Fund. Established in 2008, this project funds exciting research projects on the human microbiome. One of the most significant findings is that the diversity of bacteria in the microbiome is a good indicator of an individual’s health. This is particularly true of metabolic diseases like obesity, heart disease, and type 2 diabetes.

This research has shown, for example, that obese people tend to have far less diversity in their gut bacteria than do people of a healthy weight. This is an amazing finding and it surprised a lot of people, including scientists who have worked in this field a long time. It’s only been in recent decades that the diversity of bacteria, i.e. the number or species and strains present, could be analyzed using molecular DNA techniques. Since prebiotics increase the diversity of friendly gut bacteria, their use has very measurable health benefits. For example, if diversity of the microbiome of diabetics is increased, it has a stabilizing effect on blood sugar with no additional changes to the diet and no changes to medication.

You don’t have to wait for more research from the The Human Microbiome Project to start taking inulin on a regular basis. Simply Probiotic is one of the top rated and easiest ways to get a regular dose of inulin into your gut. At minimum, it increases the diversity of your friendly gut bacteria. And it appears it may also have a therapeutic benefit for many chronic diseases that lower one’s quality of life and decrease one’s natural life span.

While there are other prebiotics you could take, the inulin in Herbalife Nutrition’s Simply Probiotic contains extra long chain inulin, so it can reach the far end of the large intestine. Many prebiotics get eaten up by the intestinal bacteria before they can reach the end of the intestine. Therefore, by getting a steady dose of inulin into your system, you ensure that all of your gut is populated by friendly bacteria. This ensures that your gut is able to absorb all of the nutrients from your food as it passes through your system. In fact, some of the prosperous bacterial colonies in your microbiome, fed by inulin, will even produce additional vitamins and antioxidants.

The real health benefit of a probiotic, regardless of the marketing claims, depends on its ability to survive the highly acidic environment of the stomach. This is because these beneficial bacteria (and fungi) must pass through the stomach to get to the colon (large intestine) where they colonize and work their magic. This is true whether you’re getting your probiotics from functional foods like yogurt or from probiotic supplements.

The upper gastrointestinal tract, beginning with the stomach, is what biologists call an “extreme environment.” In other words, most organisms, including bacteria, cannot survive the conditions of the stomach. Even if they do survive, they don’t usually thrive. Gastric juice in the stomach, usually called stomach acid, is composed primarily of highly acidic hydrochloric acid, with a pH ranging from 1.0 to 3.0. For reference, both lemon juice and household vinegar have a pH of about 2.0.

In addition to acid, gastric juice also contains salts, including potassium chloride and sodium chloride. Most bacteria cannot live in a salty environment. This is, in fact, why your mom told you to gargle with warm salty water when you had a sore throat. The salt crystals killed the harmful bacteria making your throat sore.

You may be wondering why the stomach produces these harsh conditions if it kills our much-needed friendly bacteria. The strong acid in your stomach performs two important tasks:

1. Stomach acid unravels proteins, which are large convoluted molecules, so that digestion on amino acids can begin.

So, while stomach acid presents a significant challenge to beneficial bacteria making their way to the gut, where we need them most, it also confers major health advantages.

Are the Probiotics Found In Yogurt Killed By Stomach Acid and Salt?

The primary probiotics in yogurt are:

The FDA defines yogurt as a dairy product fermented by lactic acid-producing bacteria, specifically Lactobacillus bulgaricus and Streptococcus thermophilus. These are both friendly bacteria known to provide significant health advantages when they colonize the gut. There are literally thousands of strains of each of these bacteria species.

Through hundreds of research studies, going back to the 1980s, scientists have attempted to determine if these two species of friendly bacteria, as well as close relatives, can survive the trip through the inhospitable conditions of the acidic stomach. There have also been many attempts to quantify the percentage of these probiotics that do survive stomach acid and make it to the gut. Another area of interest has been whether or not these probiotics are able to actually colonize the gut once they survive the stomach acid.

The results of these studies have been mixed, to say the least. This is partly due to the different procedures used, and also the different strains of the same species that have been tested. For example, different types of agar to plate fecal samples seems to affect results. The exact strain tested also influences the results, since some strains are more acid-resistant than other strains of the same species.

After sorting out these differences in procedure and strains, the consensus is that some Lactobacillus bulgaricus and Streptococcus thermophilus do survive stomach acid. The percentage depends on the exact strain and the amount ingested. Lactobacillus bulgaricus survives stomach acid better than Streptococcus thermophilus, but neither survive it well.

Various Solutions To Getting Probiotics Past Stomach Acid

Stomach acid is so hard on friendly bacteria, some health experts refer to the stomach as a “bacteria execution chamber!” Over the years, many techniques have been suggested to get viable probiotics past the stomach acid and into the gut. For example, some people take probiotics on an empty stomach. The theory is that less acid is produced in the stomach when there’s no food present, so more probiotics will pass through to the gut.

Other people take alkaline powders to make the stomach less acidic, but this can have serious adverse effects. Many probiotics sold today come in capsule form with some type of “enteric coating” designed to survive stomach acid, although the true effectiveness of these coatings is up for debate. Combining probiotics with dairy, rather than water, may also help, but the results of such research are inconclusive.

There’s a New Probiotic That Can Definitely Survive Stomach Acid

Bacillus coagulans is a spore-forming friendly bacteria that can survive stomach acid and the salts of the upper digestive system – and it does so quite well! The most promising strain of this probiotic is GanedenBC30 (Bacillus coagulans GBI-30, 6086). It’s so successful at surviving the harsh stomach environment because it produces highly resistant spores. These spores lie dormant until they’re introduced into the perfect conditions of the human gut. Most of these spores pass through the acidic stomach unscathed and then form beneficial Bacillus coagulans colonies in the gut.

Simply Probiotic, a powered probiotic supplement from Herbalife Nutrition, contains these GanedenBC30 spores as a key ingredient. Simply Probiotic has become popular due to its convenience and versatility. The powder doesn’t require refrigeration, so you can keep it in a desk drawer, briefcase, or backpack. Moreover, unlike other probiotics that are killed by heat, Simply Probiotic can be added to piping hot beverages like coffee and tea. You can even add Simply Probiotic to baked goods like cookies or meatloaf.

Herbalife Nutrition inspires customers to embrace healthier, happier, and more active lifestyles. They offer a wide range of products, from those aimed at energy and personal care to weight management and targeted nutrition. When you become an Herbalife Nutrition customer, you’ll benefit from one-on-one coaching and high-quality products backed by science.

Probiotics Work in Harmony With Prebiotics

Besides probiotics, Herbalife Nutrition’s Simply Probiotic powder contains organic inulin, an important prebiotic. Inulin is essentially a highly effective “fertilizer” for Bacillus coagulans GBI-30 and other beneficial bacteria Unfortunately, most people don’t get enough of this prebiotic in their diet, so supplementation is the best way to get a steady supply. Just as you can add fertilizer to make your plants grow better, inulin helps beneficial bacteria grow in the gut. This is particularly true on the left side of the colon, where other prebiotics have difficulty reaching.

Research on how well GanedenBC30 (Bacillus coagulans GBI-30, 6086) survives stomach acid was recently presented at the American Society for Nutrition (ASN) Annual Meeting in Boston Massachusetts by Dr. Troy Smillie, a senior scientist at Herbalife Nutrition. The results are very promising. Using an “artificial stomach,” the researchers compared how well GanedenBC30 survived in simulated stomach conditions compared to other probiotics found in yogurt. GanedenBC30 was the clear winner, beating twenty-four out of twenty-five yogurt species in its ability to survive stomach acid.

Connect with Herbalife on social media for updates on this research:

Owning A Dog Is Good for Your Heart

About the Author: admin